Occasionally a thought or random piece of inspiration strikes me and I get this funny image in my mind.  And then, I spend a little time doodling in my sketchbook and wa-la!  A cartoon.  Here is what I've been up to the last couple of days in my spare time.

The other night, there was a spider on my ceiling.  I have nothing against bugs, but if they get in my living space, they better be prepared to depart this world as a smudge on the bottom of one of my shoes.  But, my ceilings in my apartment are quite high.  So, I knew that getting this creepy dude was likely going to involve a step stool and thus, taking my life into my hands.  What if he jumped out at me?  And I fell off the stool and critically injured myself?  This did not sound appealing.  The spider was safe for the moment.  But, I did start to consider things I could use to squash this guy that had a little more range: 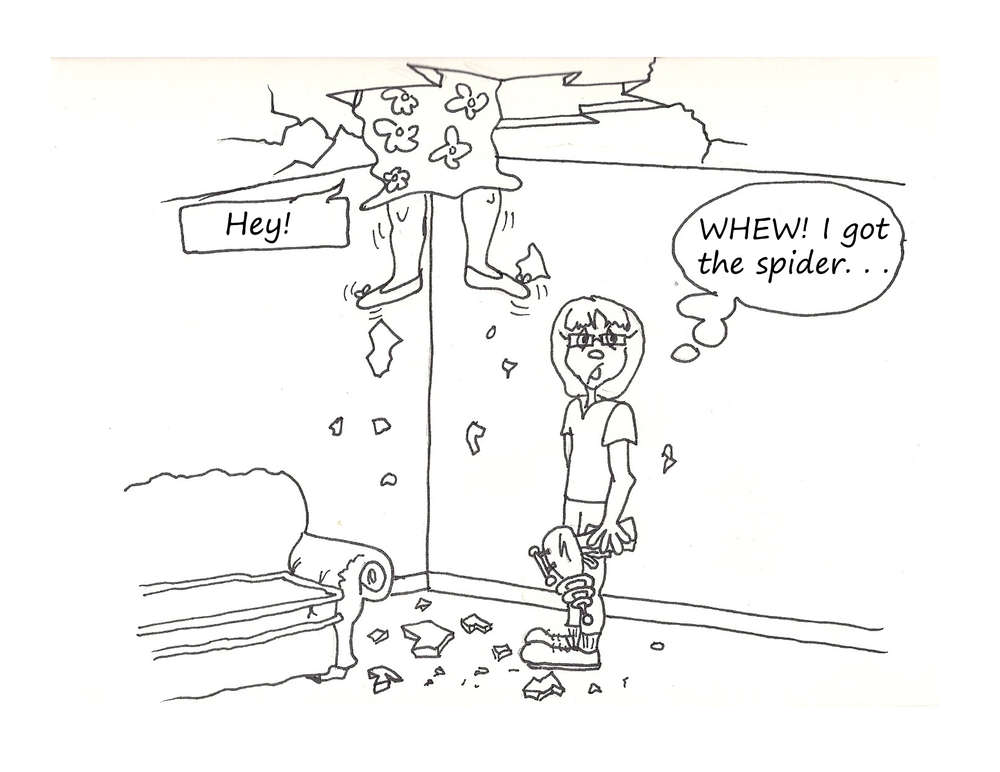 When frightened, the imagination has no limits, right?  Sure I would have a hole in my ceiling, but when it comes to the insect population, sometimes sacrifices have to be made.  Which painted some amusing pictures in my mind.  I was imagining the whole ceiling coming down.  And picturing the reaction from my upstairs neighbor.  And a bunch of other possibilities.  So, the above cartoon is what I came up with.

One thing about my cartoons is I usually have some random ideas and images and I've thought of what direction I want it to go, but I'm never quite sure how they are going to come together.  And I could probably take the same idea and come up with a million other images.  There are so many possibilities!  For instance, I finished this one and then got to thinking that it'd be just my luck that I miss the darn spider.  So then, I added him to the lower right corner having a good chuckle: 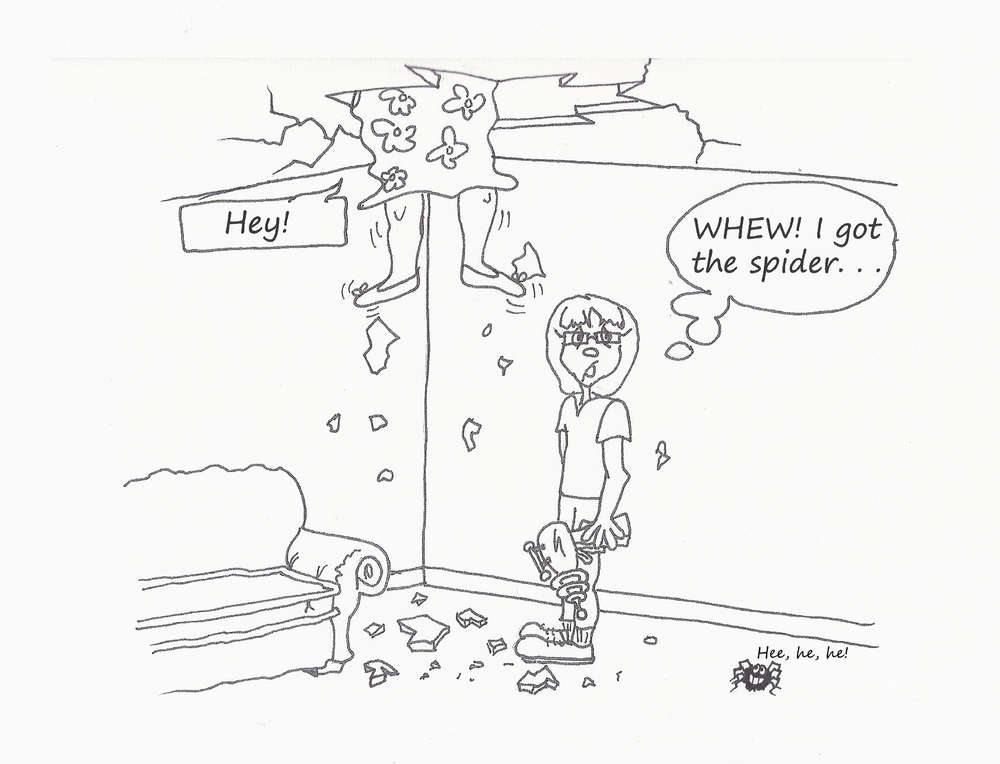 I think I got the spider the other night.  He moved around the edge of the ceiling and I am pretty sure I got him with the end of my broom.  It's possible that he scrambled off somewhere else and is yet lurking around waiting to surprise me.  Spiders move so fast!  But, I'm trying not to think about that. . .

Fun with Keep Calm and Carry On

The world seems to have gone crazy with this saying and an infinite variety of phrases are showing up all over the place.  The idea for my other cartoon I drew this week came to me as I was driving around taking care of errands around town last weekend.  I drove past a yarn shop with a sign outside that said, "Keep calm and carry yarn."  I had a good laugh at that and then considered it's potential: 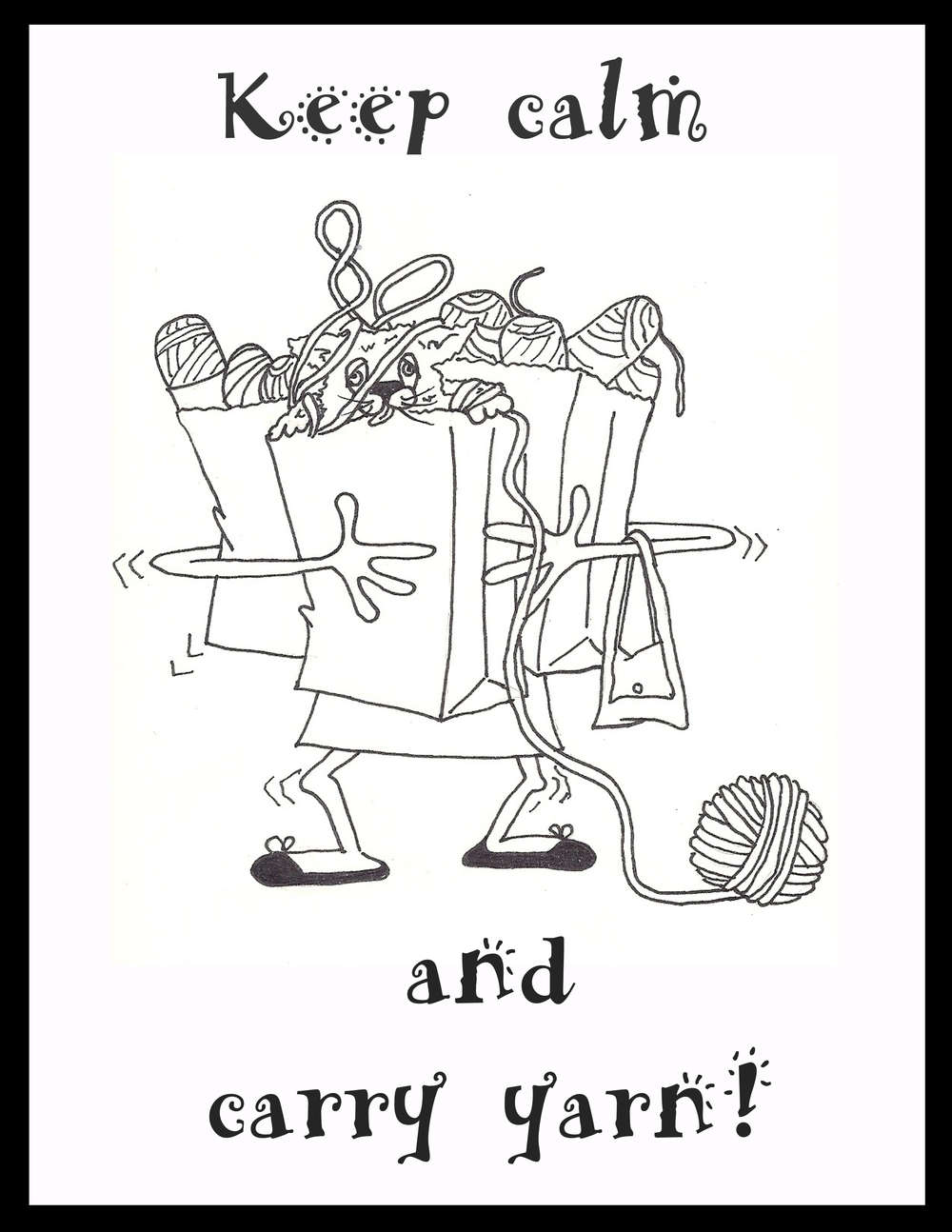 I am an avid crochet fiend in my spare time so this saying is perfect for me!

Re: Just For Fun

Re: Just For Fun

Thanks! They were fun to make.