Life is Short. Let's Not Take It So Seriously

"The time you enjoy wasting is not wasted time."  Thank goodness!  Because I've spent the last week or so making art that goes under the category, for the moment at least, of "just for fun."  Check out some of my latest cartoons.  Discover the processes and inspiration behind a few of them.  And smile.  I did.

This first one is my shout out to summer.  In spite of the fact that summer comes with sweaty, swealtering heat, there is also much to appreciate about these all too brief days of sunshine:  wildflowers by the highway, s'mores, thunderstorms, long, lingering daylight,  bicycles, camping, swimming, iced tea, outdoor concerts, fairs and food on sticks, hiking in cool quiet woods, and one of my personal all time favorites, sweet, juicy, sugary watermelon! 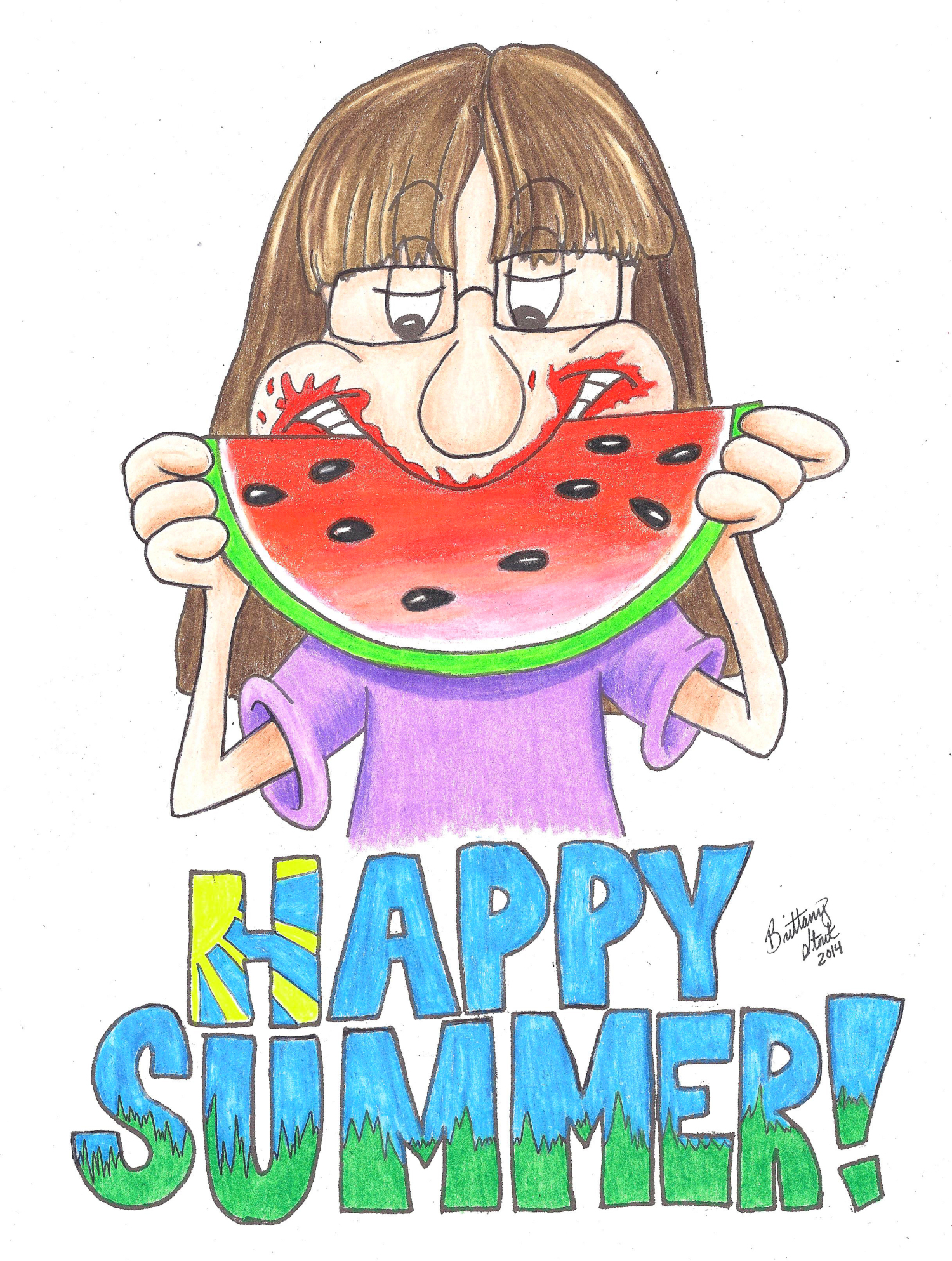 The Fourth of July

Fireworks on the Fourth of July is another thrilling thing about summer.  For the last several years, every time this holiday rolls around, my goal has been to photograph an absolutley amazing and stunning photo of Fourth of July fireworks.  Something that captures the awesomeness of the explosions of color in the sky.  While I don't know if I've yet truly been successful in this endeavor, it did eventually inspire this next cartoon.

First, I thought about all the things that symbolize the Fourth of July.  Fireworks, barbecues, parades, the American flag and so on.  Then I considered which of those I wanted to illustrate this year.  I decided on fireworks, but also wanted to include the flag, of course.  This was the Fourth of July, after all.  Not just any display of fireworks.  With my vision in hand, I set about finding images to work from.

This is what I came up with.  There's the flag and a view, albeit a coloring page of fireworks in the sky, along with some ideas for color. 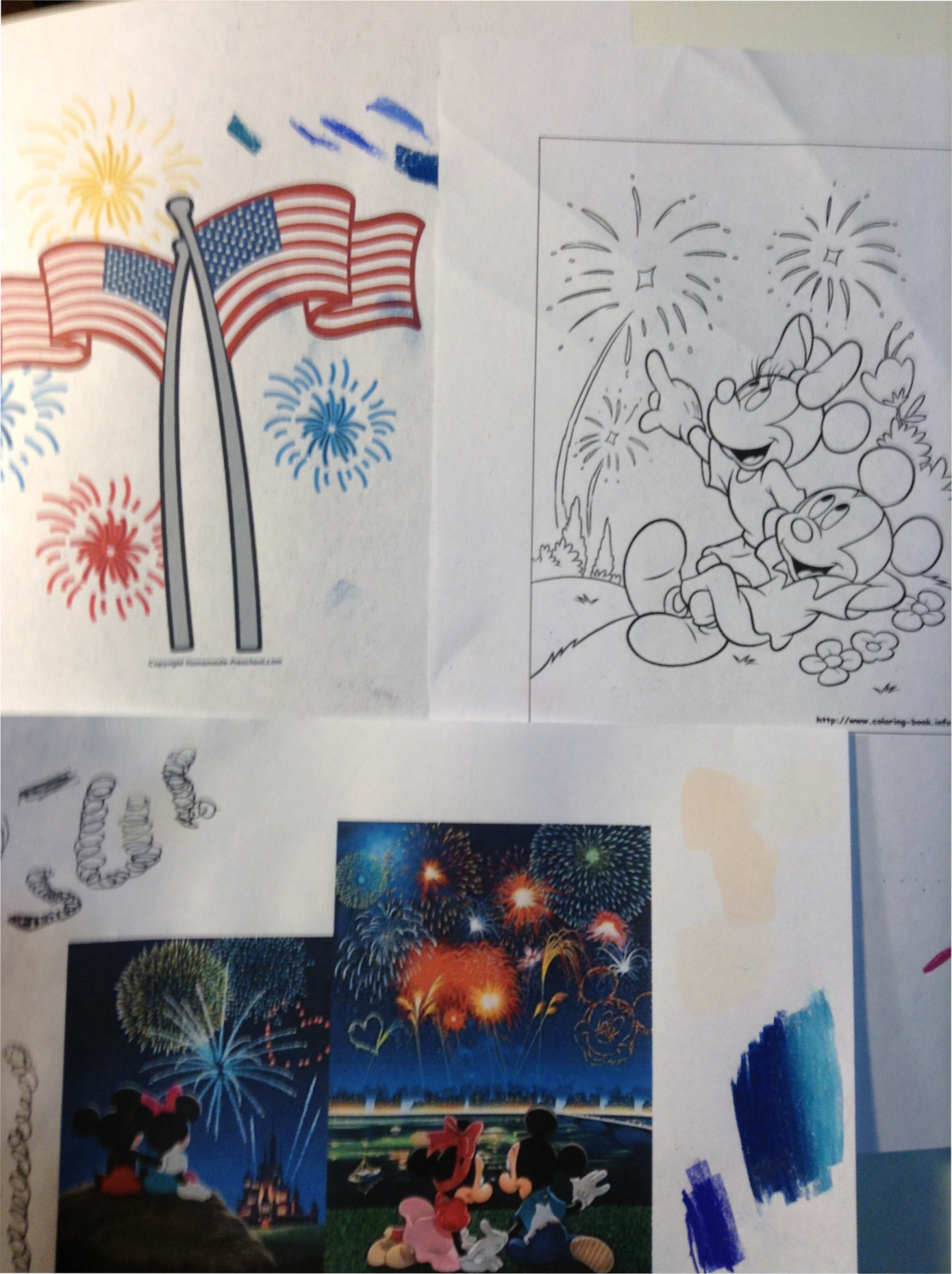 July Fourth is a holiday for many people in the United States.  I envisioned relaxing, laughing, and wrapping the day all up with those exciting explosions in the sky.  So, this was my first drawing: 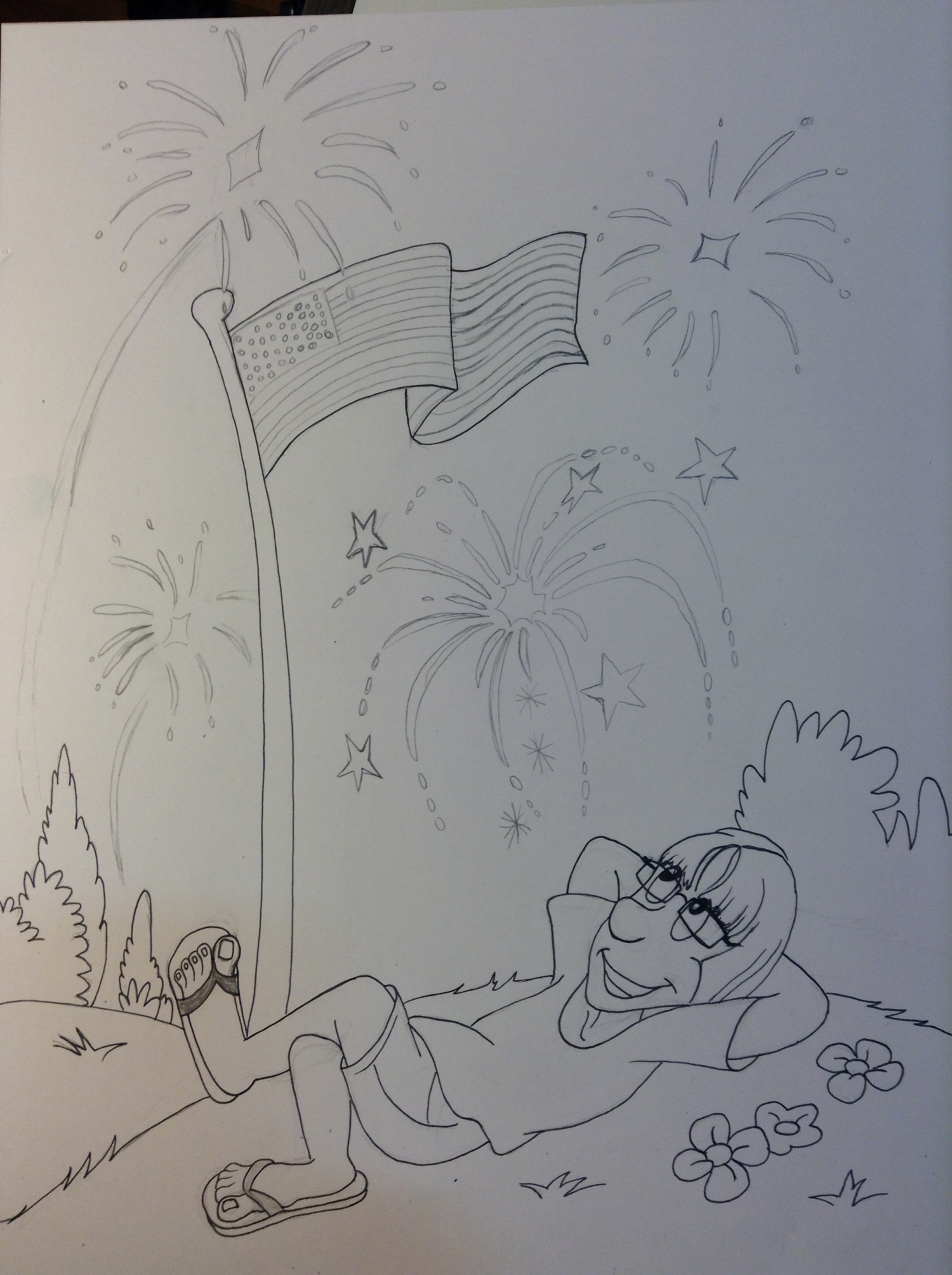 But wait!  This was me, yes.  Complete with purple polish on those toenails I showed off in my flip flops.  And relaxing yes.  Flag and fireworks.  Check.  But, it wasn't really me on the Fourth of July.  So I made some changes: 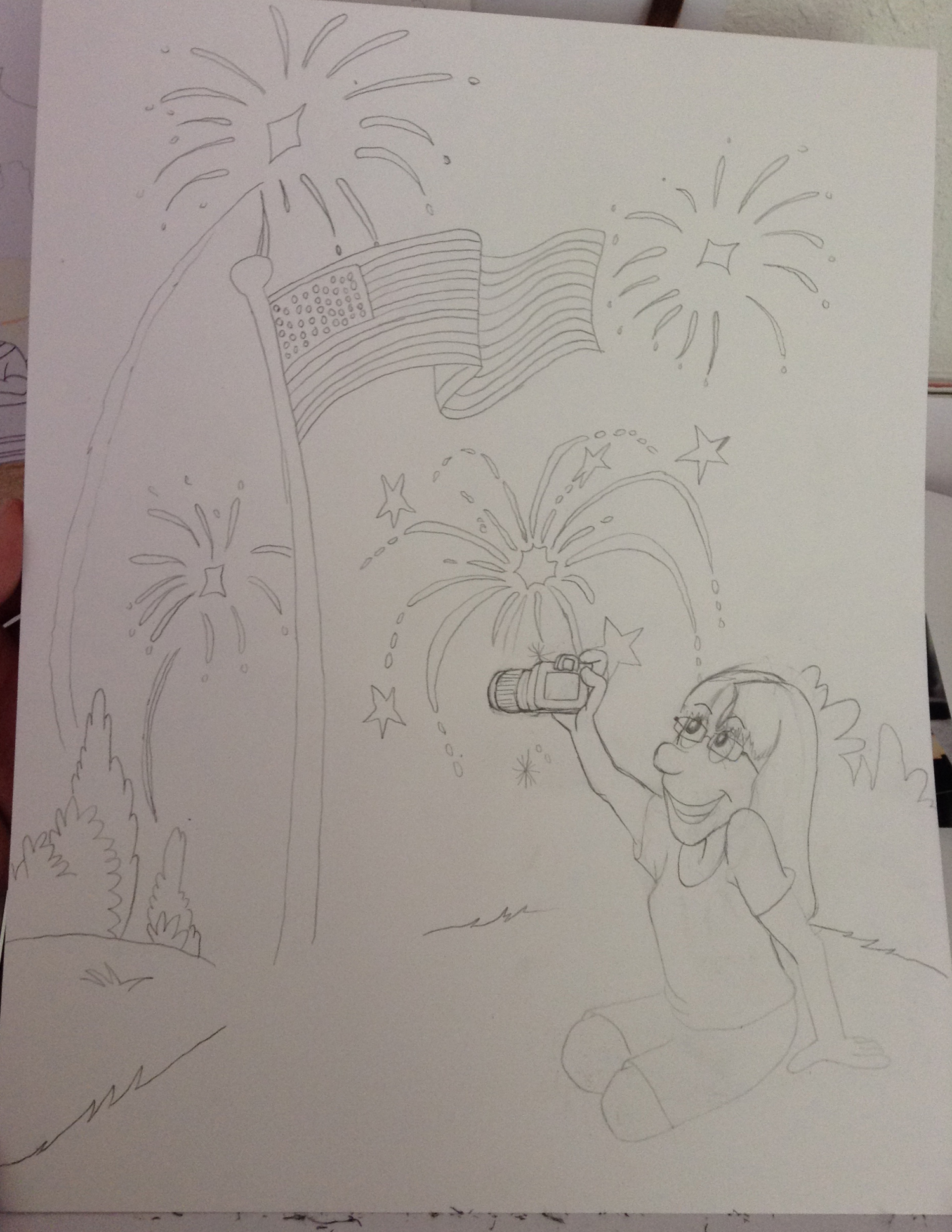 And said goodbye to purple toenail polish for now . . .

At last I was ready to outline and color!  As my cartoons tend to be quite a bit smaller than my pastel artworks, the little bits of color I've begun to add recently, I've done with colored pencil.  At 14" x 11," this piece was slightly bigger.  I've also been creating these cartoons on cardstock and, recently, smooth bristol board.  Neither of those papers have any tooth and as such, do not lend themselves very well to coloring with pastel.  So I began with prismacolor colored pencils in addition to prismacolor art stix, a stick form of colored pencil meant for larger areas.  I spent 3 hours on the sky!  And I still was not happy with the results: 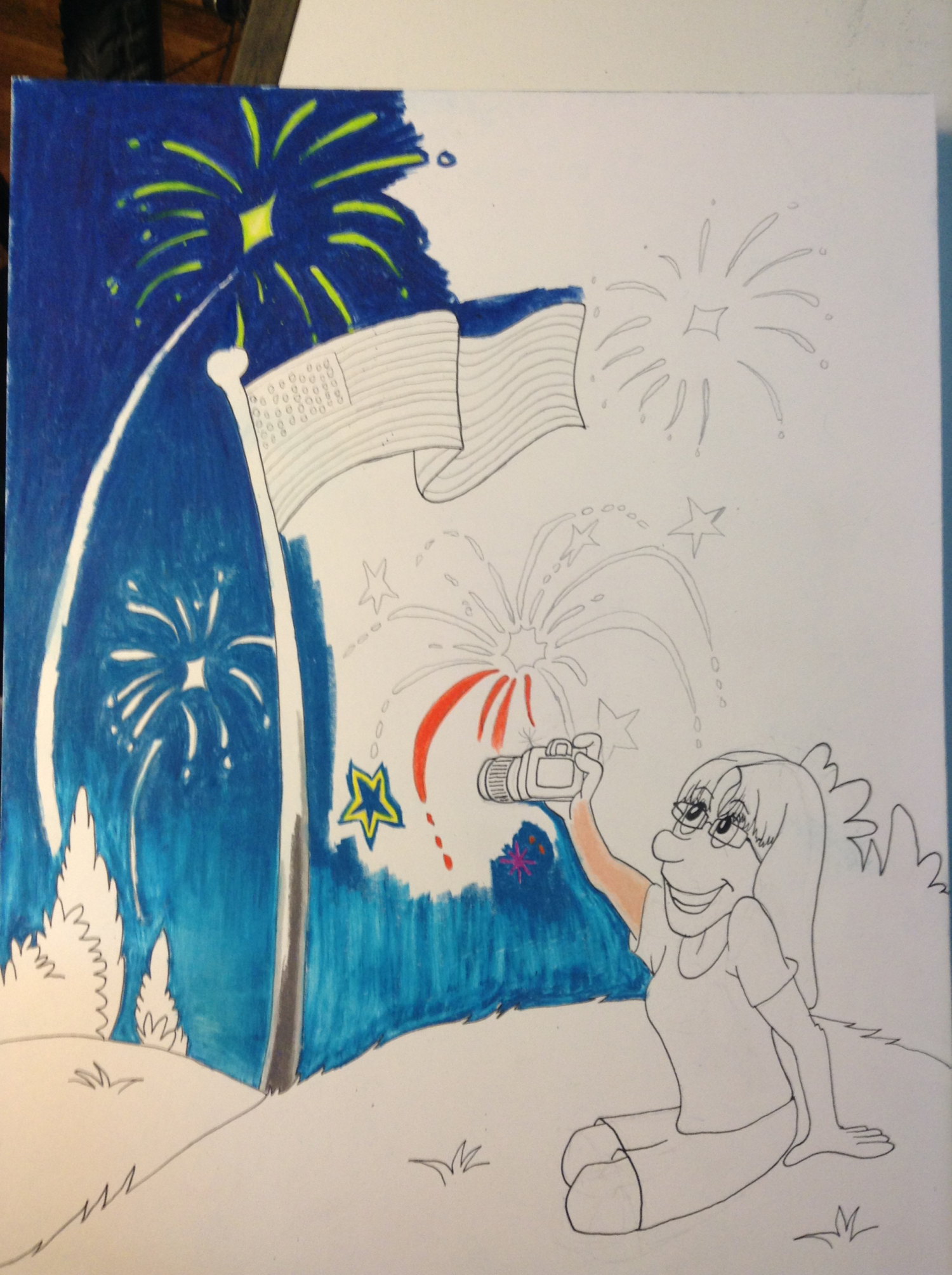 Maybe it was because I was in a hurry.  But, I didn't like the atmosphere in the sky.  There were too many lines.  It wasn't smooth enough.  Or dark enough.  The fireworks weren't glowing . . . What could I do?  I wondered, frustrated and disappointed.

I had some BFK Rives paper in my studio.  It has a very soft absorbent and velvety texture.  It's also suitable for pastels as I've used it almost exclusively for those in the past.  What if I transferred the drawing to that paper and tried, just tried using pastels?  After all, I'd just done 8 miniatures.  Surley, I could be as detailed and careful on an 11" x 14" size of paper!  Gigantic compared to 6" x 4"!  So I did.  And here is my first cartoon done in pastels! 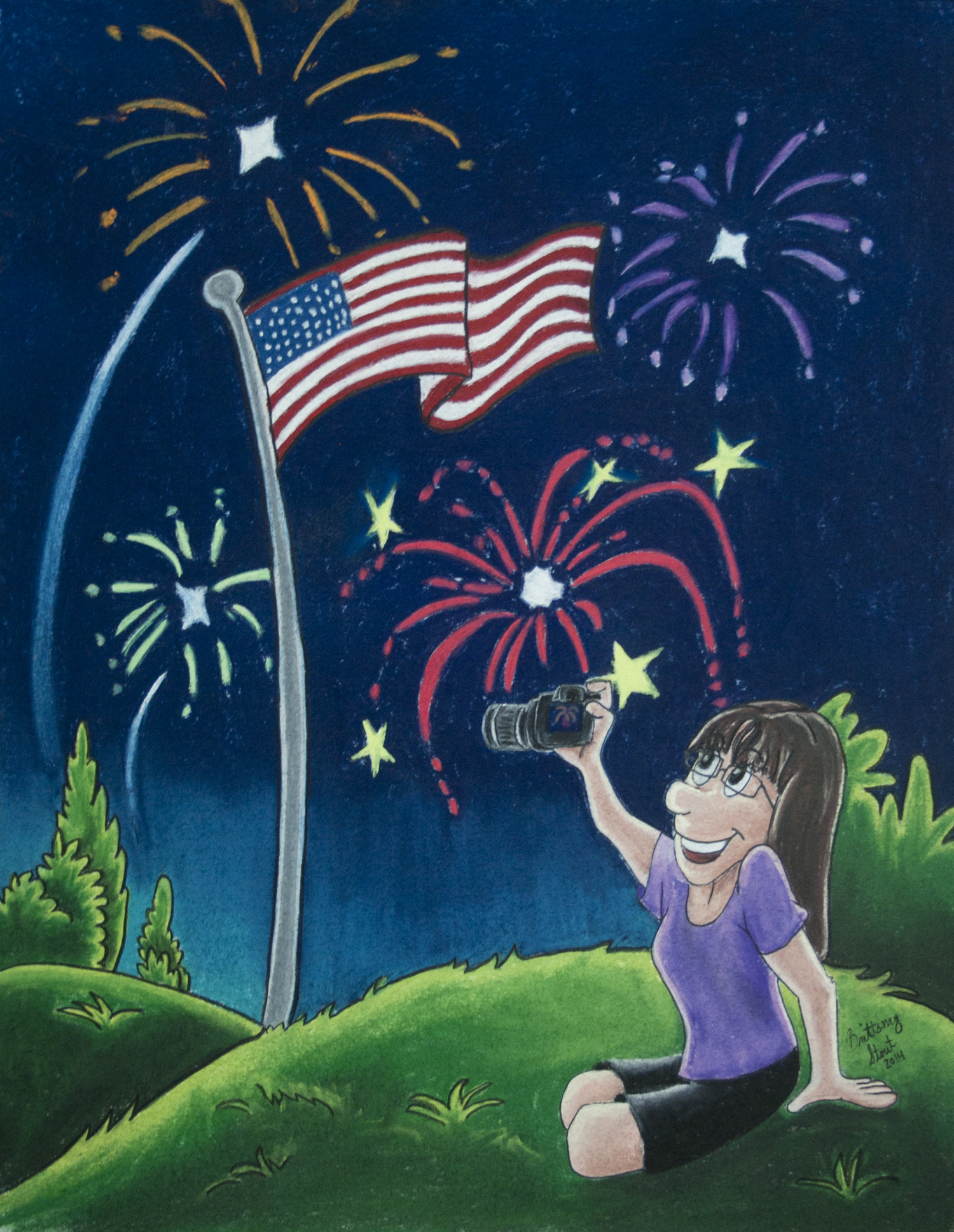 July is apparently National Ice Cream month.  Who knows?  Regardless, ice cream is also one of the best things about summer!  And the hot July days would be a welcome time to enjoy some.  So here is a quick cartoon I came up with to celebrate that fact! 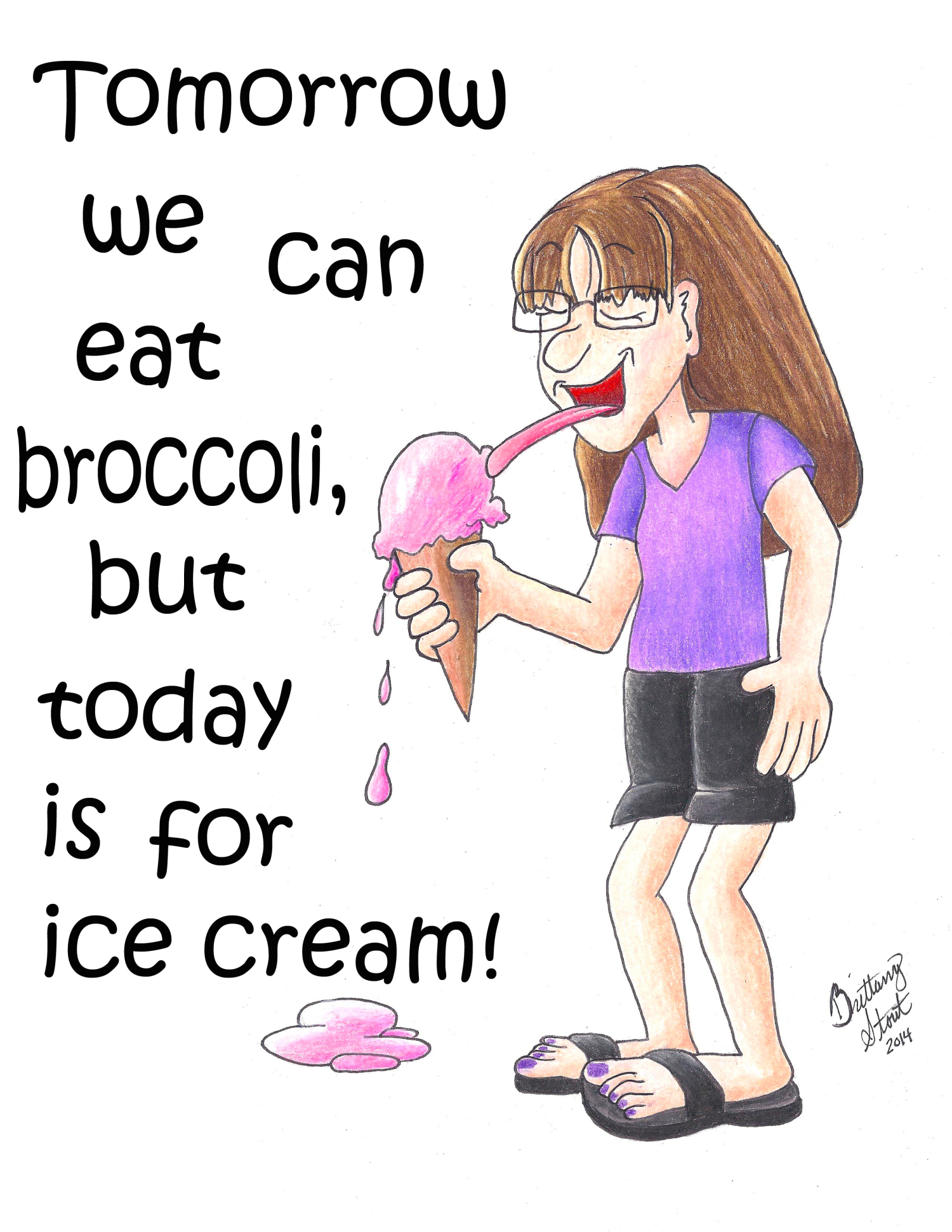 One for my Dad

I woke up a couple mornings ago savoring the sweet delight of being able to sleep in and not wake up to an alarm.  Then, I remembered that my dad, on the other side of the state, had not slept in that day.  He'd gotten up at 2:30 in the morning to go run a marathon.  From what I'd been seeing on social media sites and hearing from my mom, he felt very uncertain about whether he would be able to run the entire thing or even finish it.  He travels a lot in the summer for work which translates into not always having enough time to train as necessary and prepare adequately for a race like that.

Over my breakfast that morning, I thought that maybe there was some way I could encourage him a little bit and show him that no matter what happened, he was crazy just for trying!  Also pretty strong in a brave, courageous, driven sort of way. . .

Anyway, what better way to accomplish my desires than by a cartoon!?  I remembered a "running" quote I'd seen once that he really seemed to like.  And then set about finding a cartoon model of a runner that I could use to draw my dad.

When I begin my cartoons, I try to find clip art or cartoons of people, or even animals, in the poses and with the props that I am looking at based on whatever theme I've chosen.  Eventually, I decided on the model shown below.  On the right, is the quote I selected, which I later learned has always been one of his favorites. 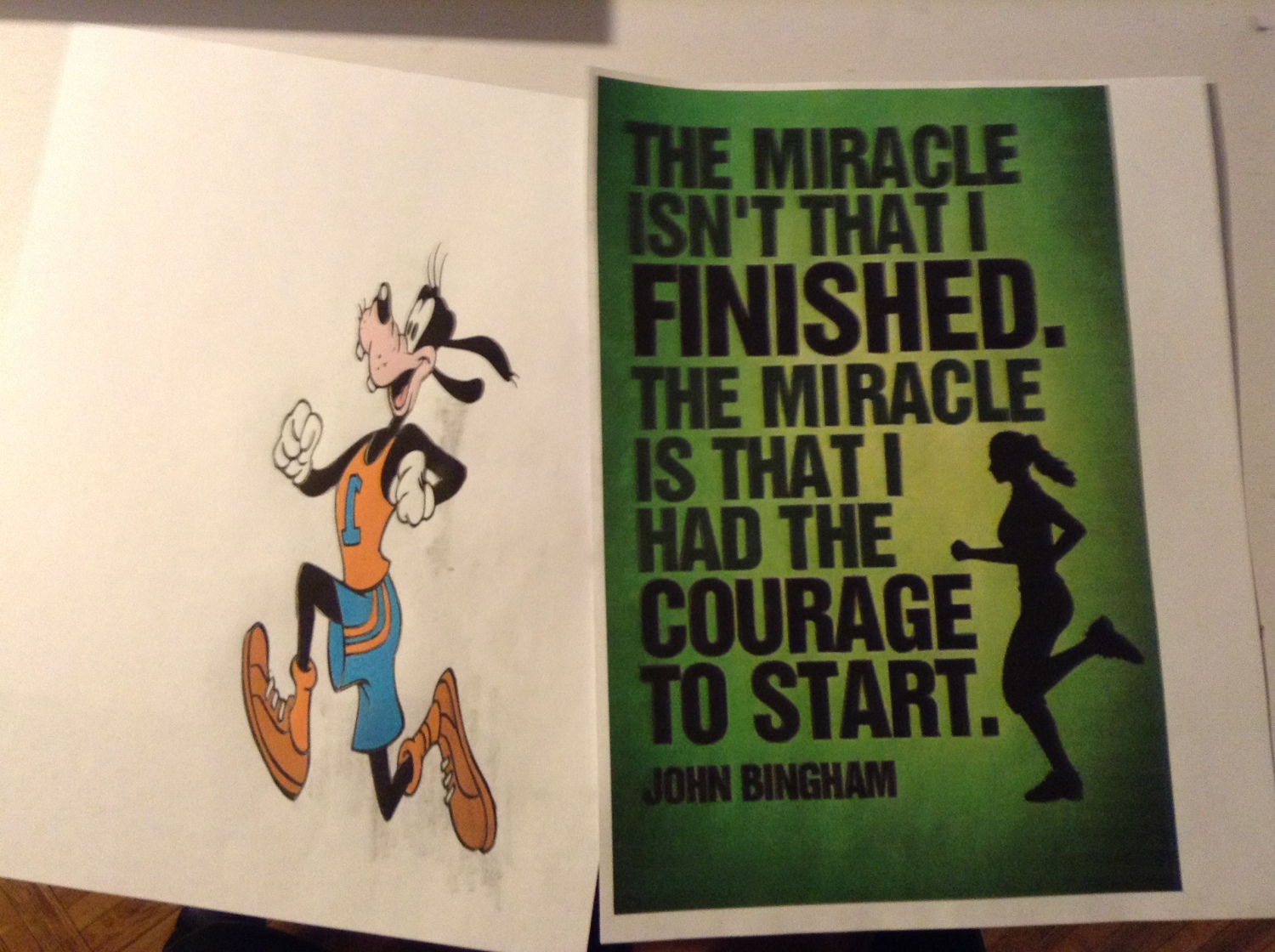 Here is the original drawing I came up with: 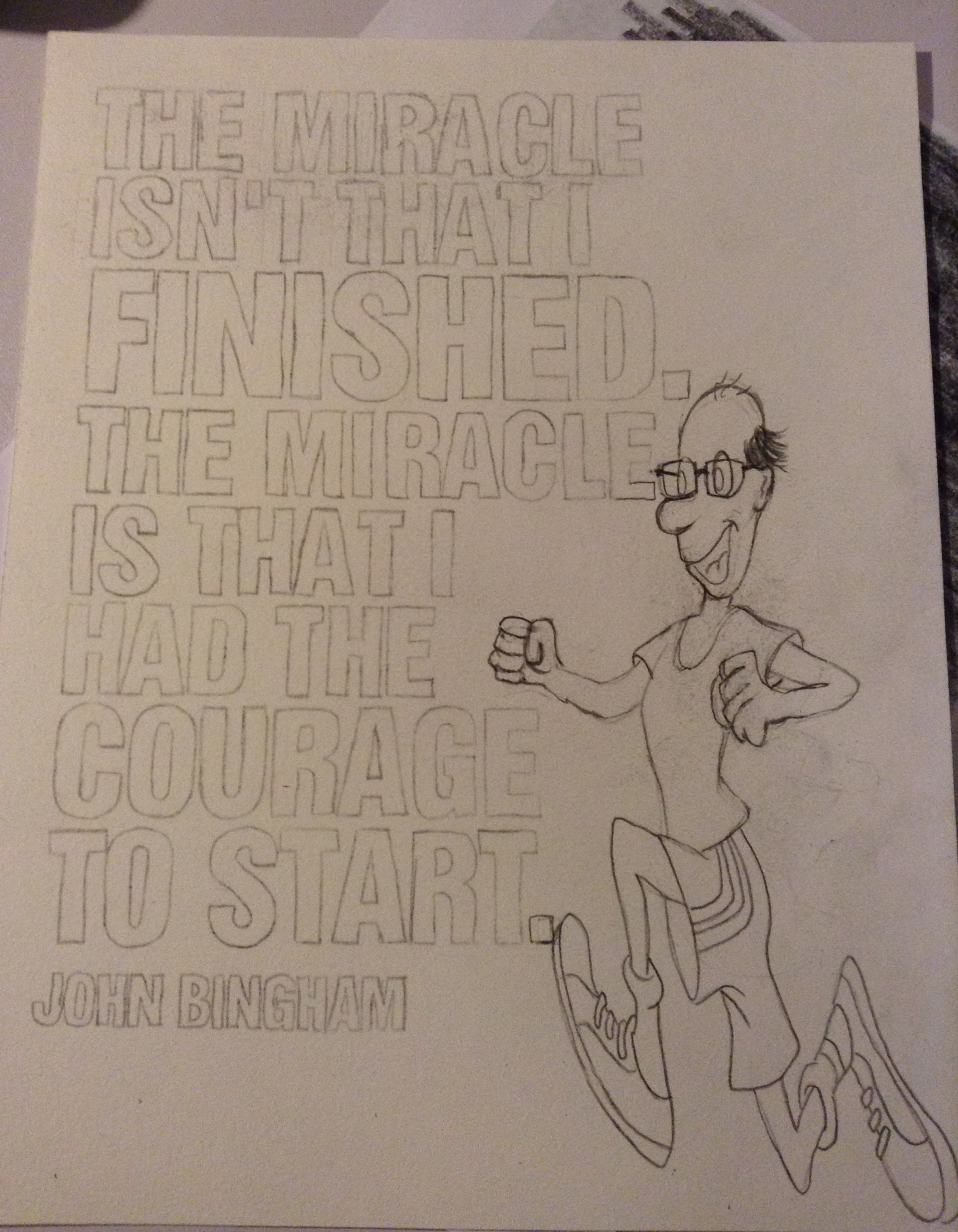 Check out that crazy smile!  I wasn't sure it was working for me.  Aside from the fact that his expression bordered, in my opinion, on "crazed-insane," it didn't seem to fit the mood of the text which seemed a bit more serious.  Also, I didn't like that he barely had any room.  There was no space on the edge of the paper and he was crunched up against the text.  I made some changes:  making the text smaller, taking that smile off his face and giving him a more earnest expression, like he's working for this a little bit.

Then, I decided I didn't want to leave the background white.  But wasn't sure I could pull off the green glow of the original quote picture with colored pencils.  I also wanted my dad to be colorful and nice and vibrant, which meant I couldn't do an underpainting in that space.  I would need to leave that area white.  Otherwise, the colors would end up a little more dull and not as intense as I was looking for.  The letters, I could likely paint over as I planned to make them dark, similar to the original quote.  After mulling it over for a bit, I tried some watercolor but left the area around my dad white.  This is how it looked with the watercolor and the text complete: 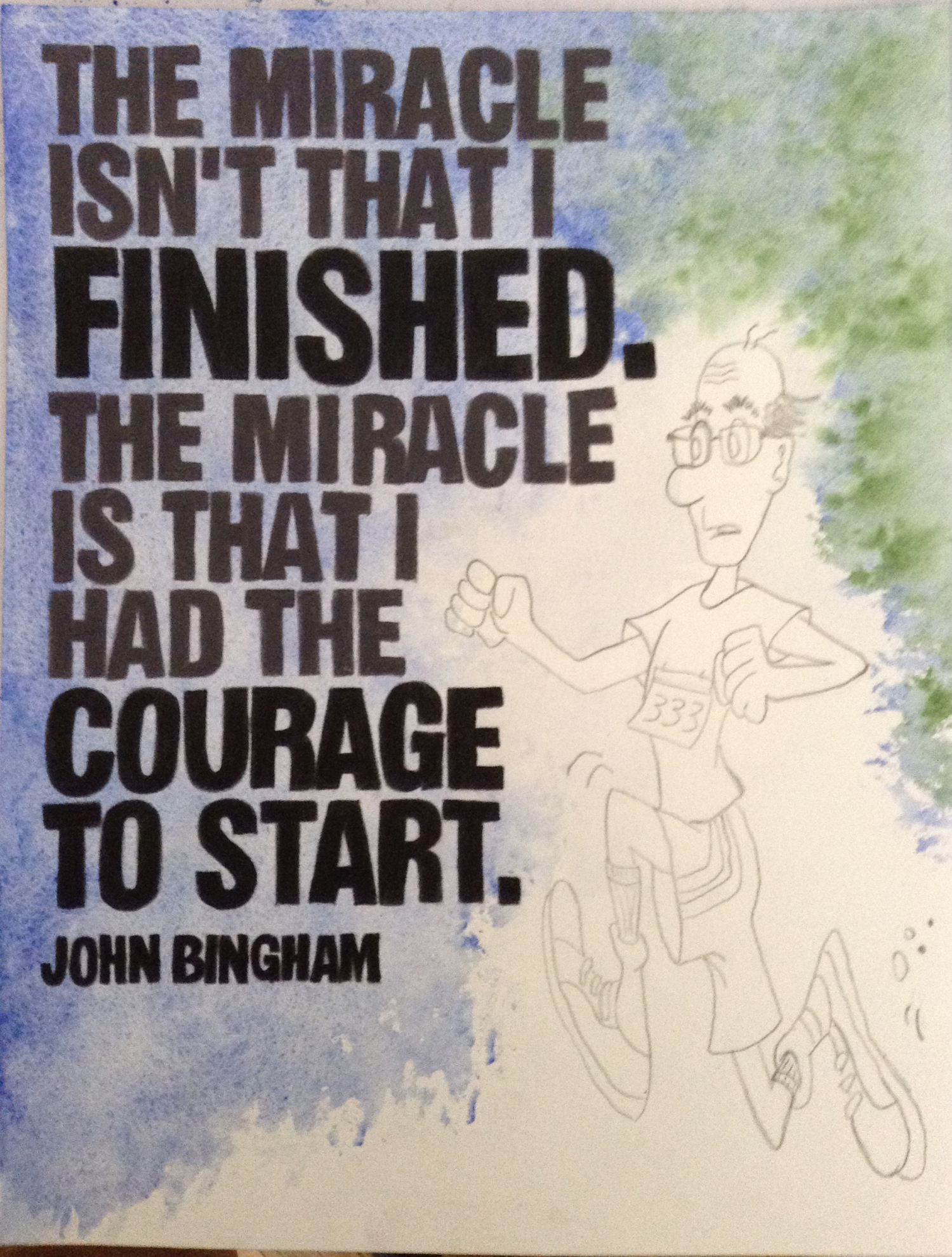 And the finished cartoon: 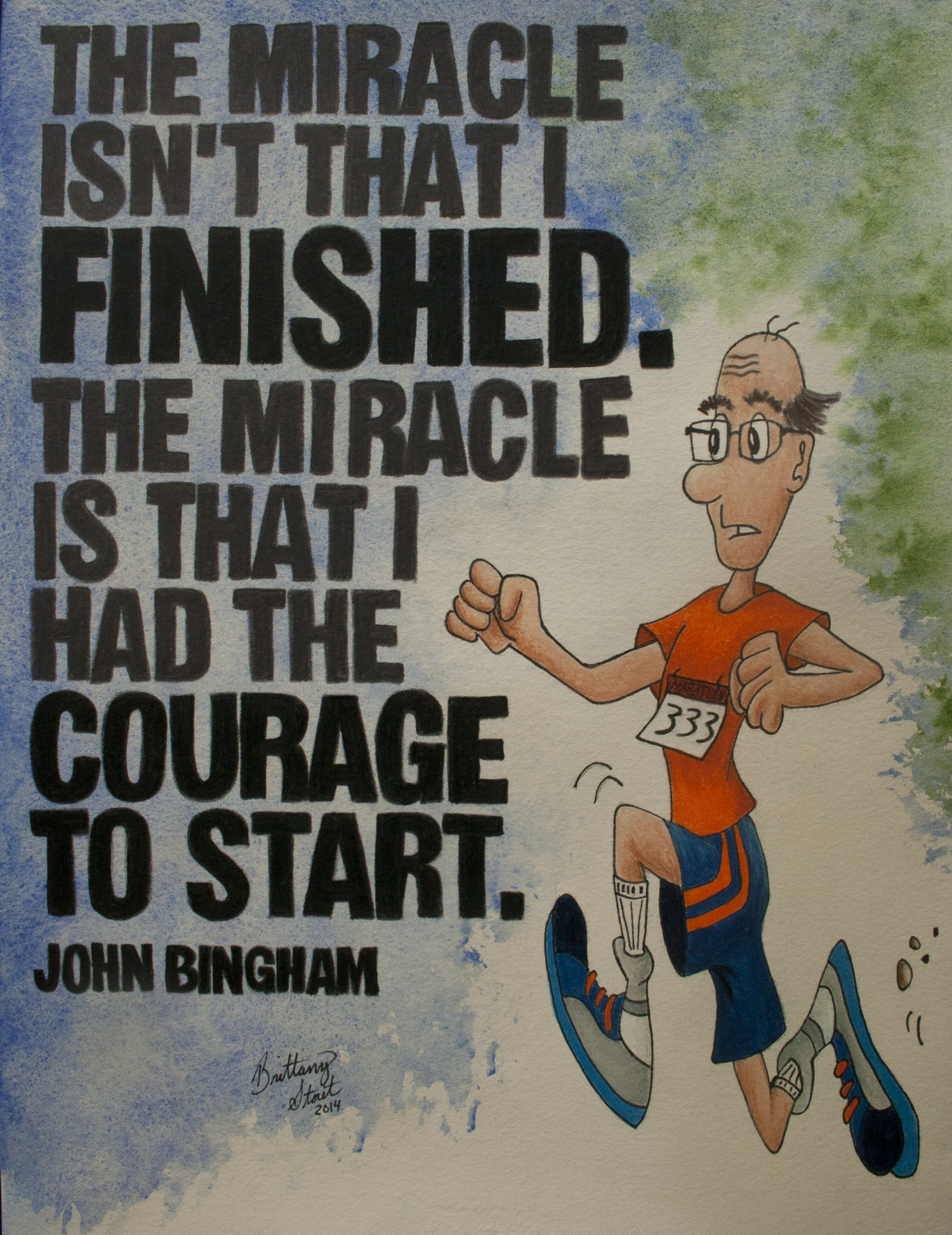 My dad really liked it.  And, he did finish the race that day.